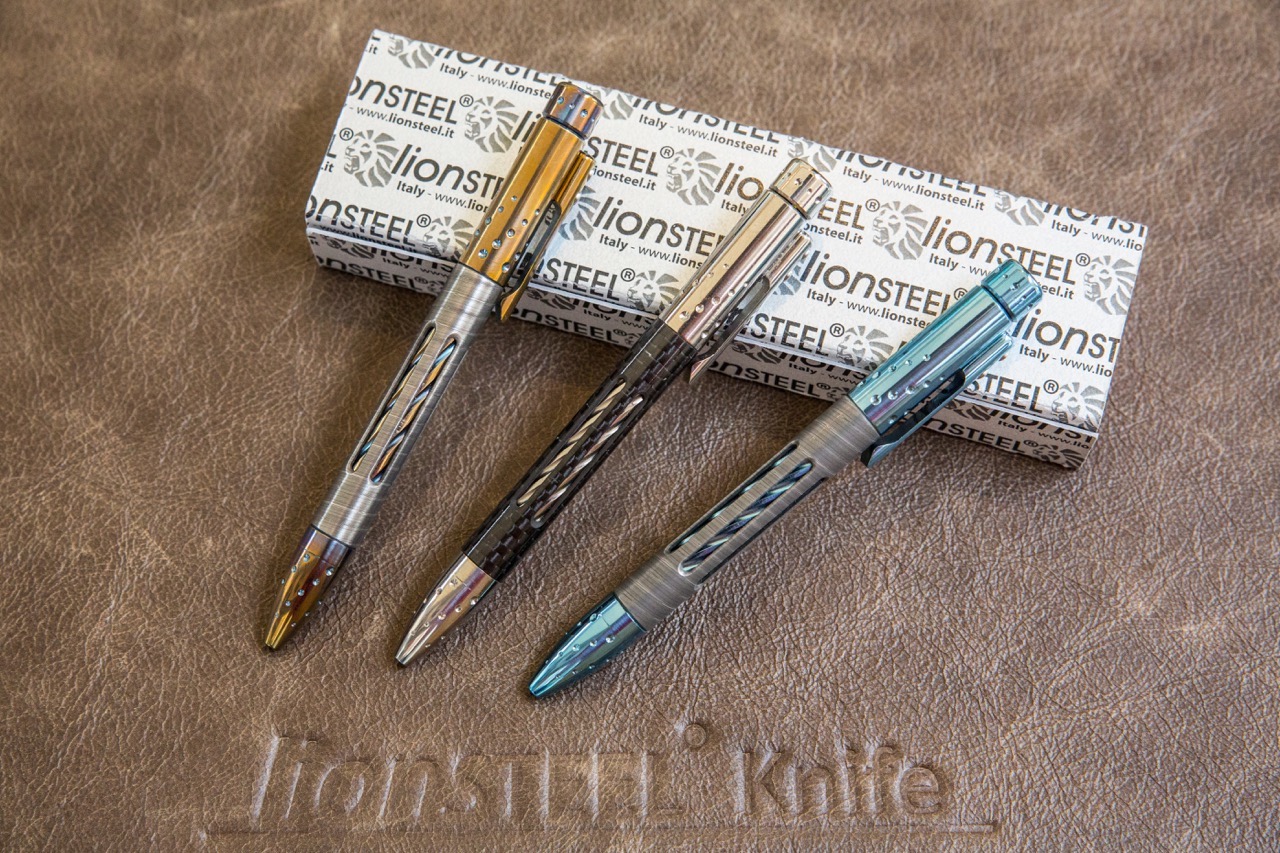 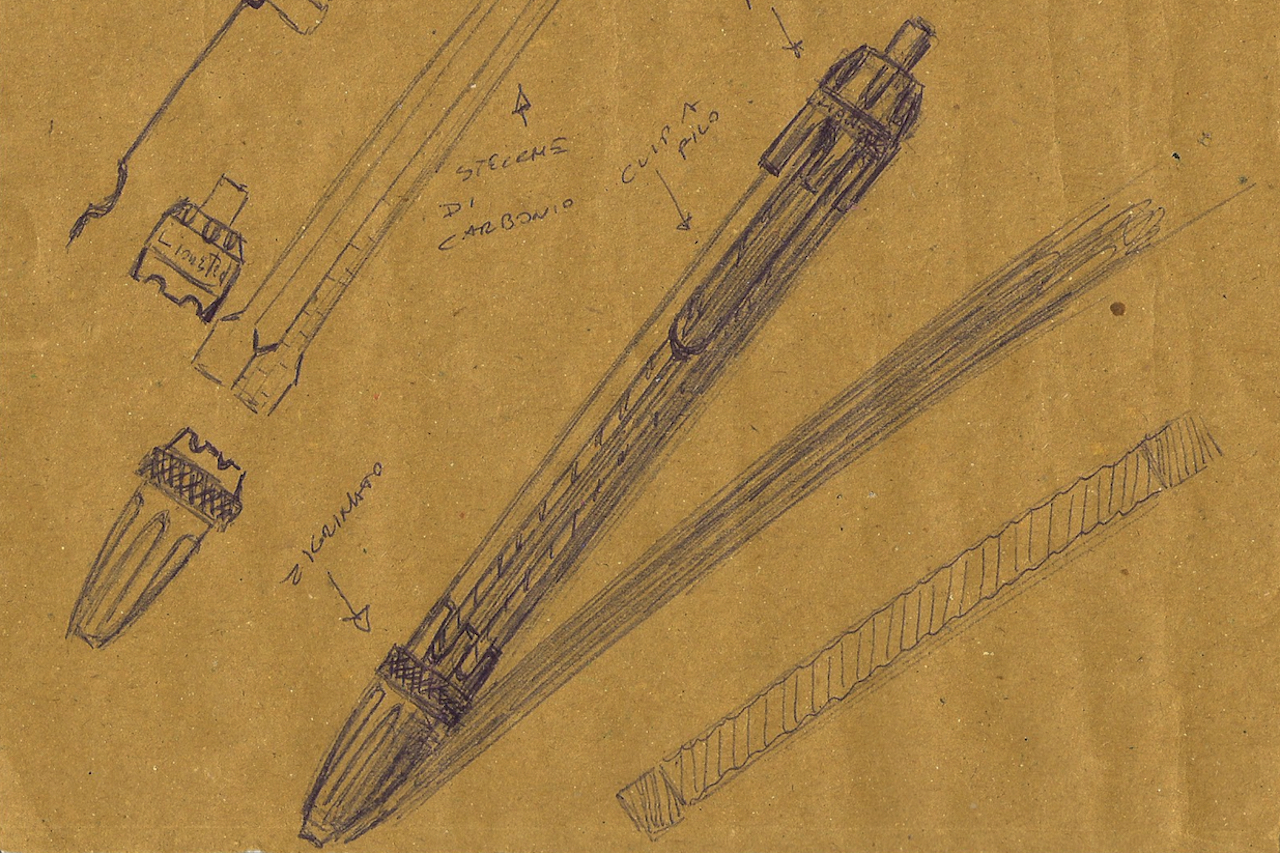 The first sketch of what after a long development would become the final design. I originally hypothesized carbon fiber slats, then replaced by a tubular element. 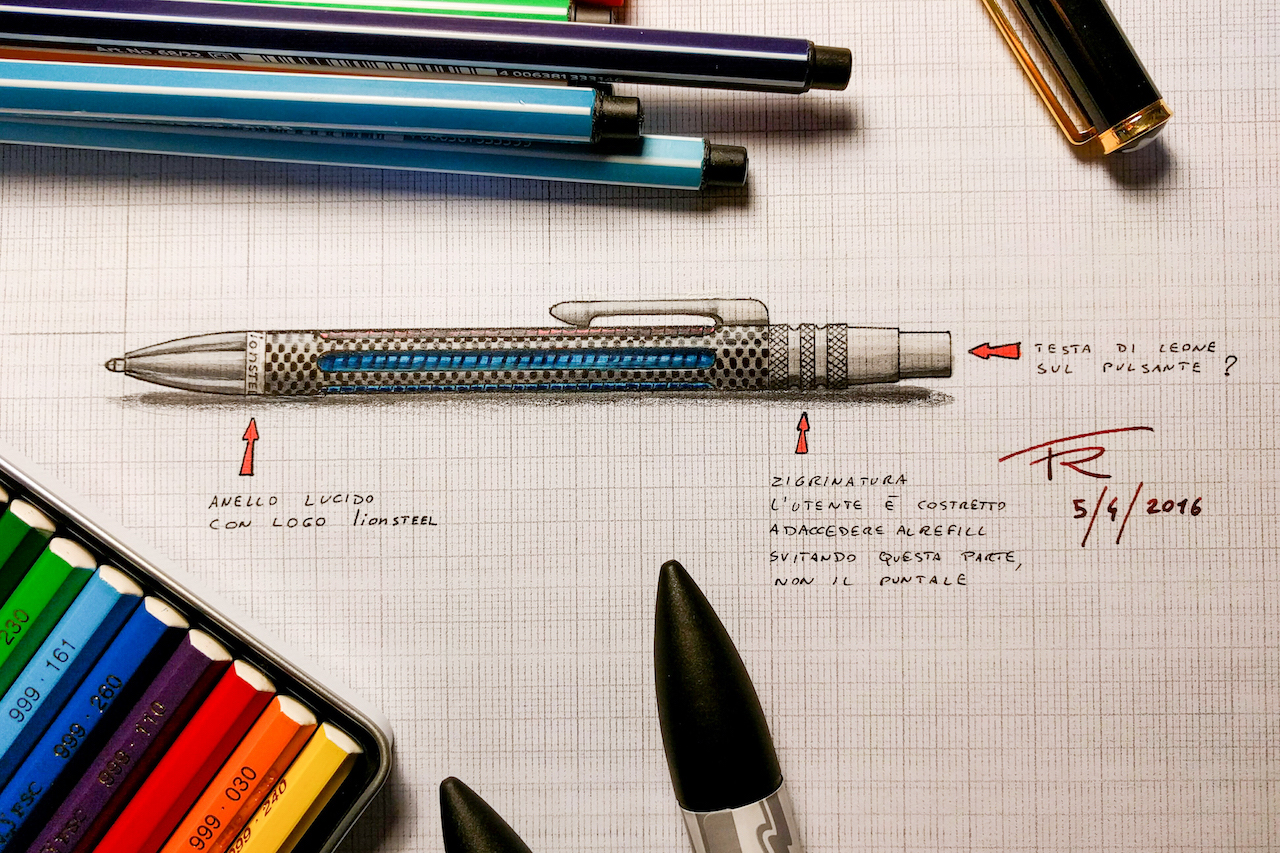 An enhanced version of Nyala, although not yet final. So far we assumed a push-button mechanism, later replaced by the more elegant and sophisticated twist mechanism. 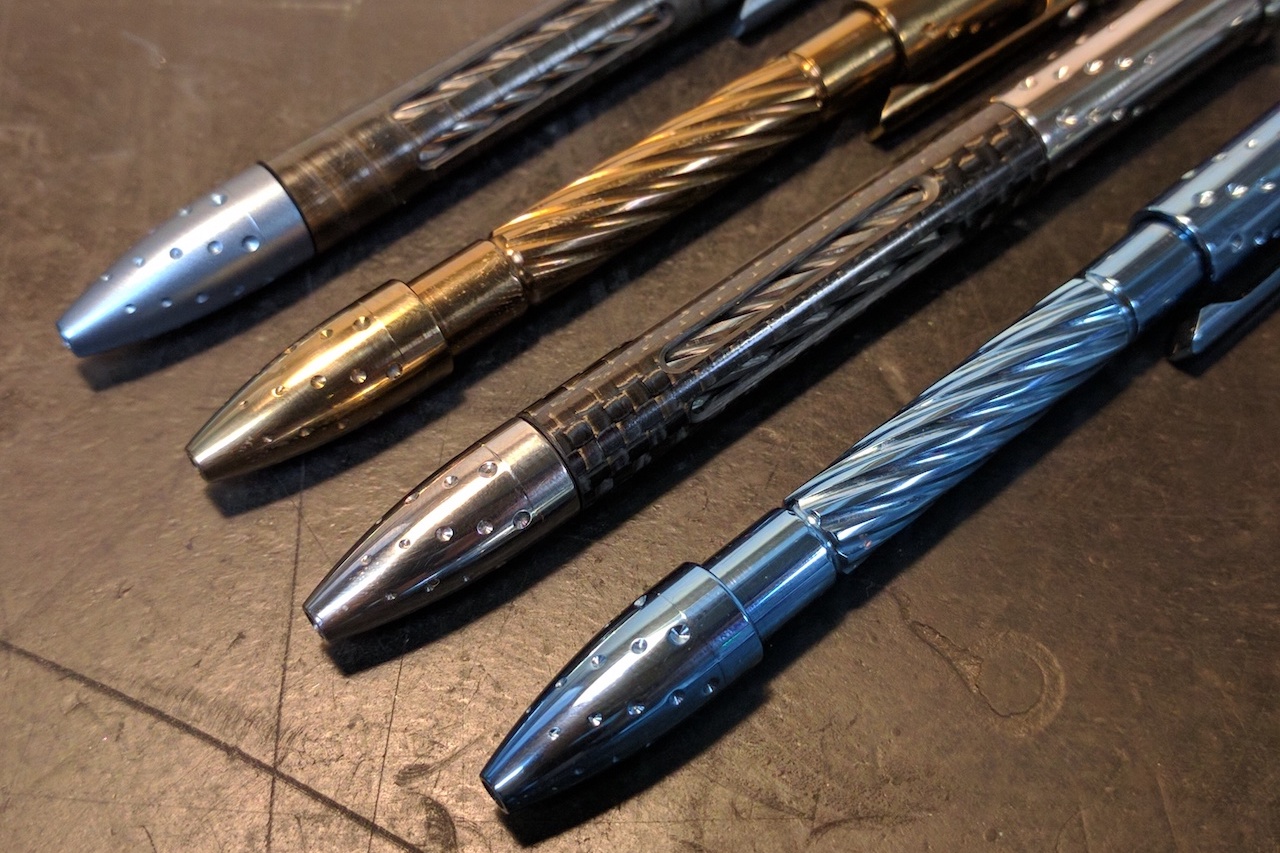 Some prototypes during the first assembly before Blade Show 2016, where the pen made its debut. 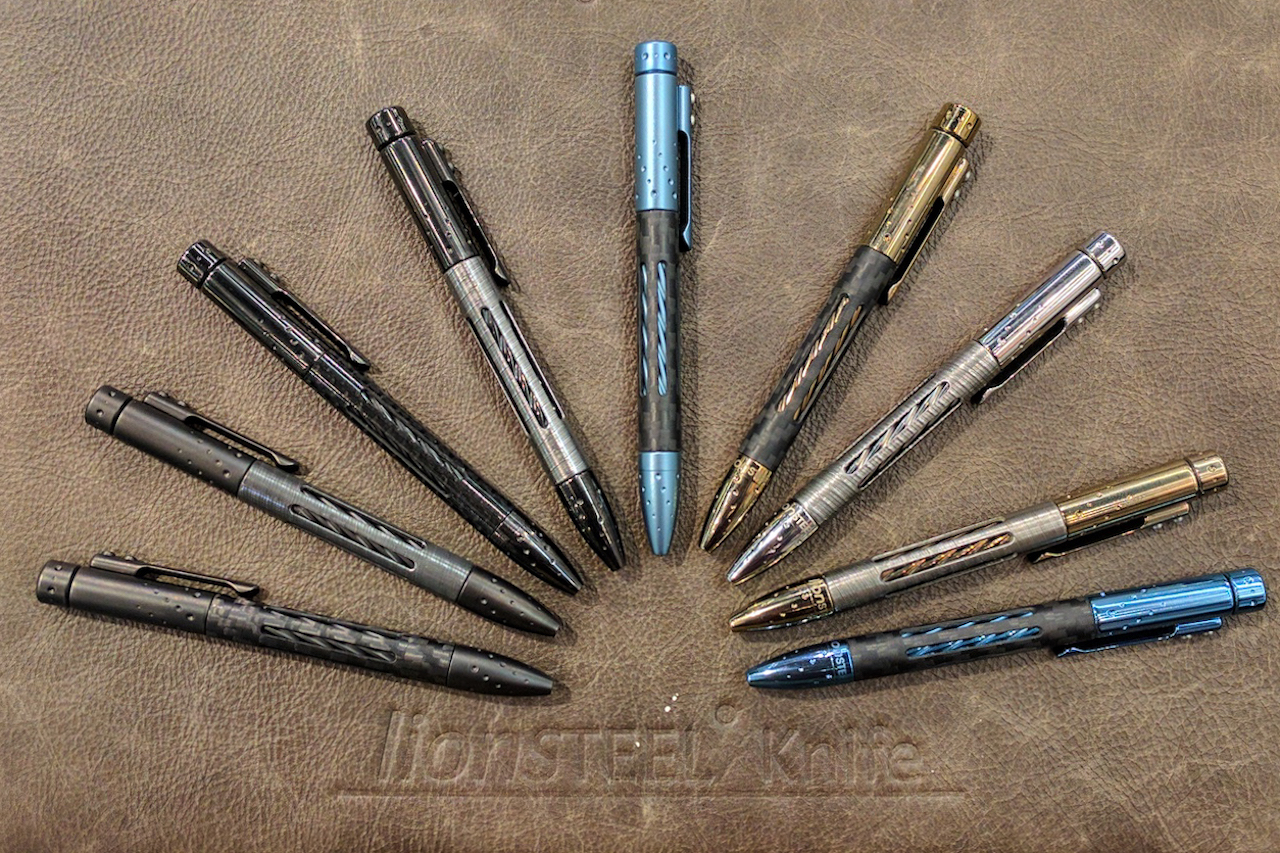 Nyala is available with the tubular element made of carbon fiber or damascus. The titanium parts are anodized in many different colors, to meet the tastes of each customers.

The box developed by Lionsteel is wooden, and reminds the ones used for their folding knives. It can be transformed into a practical desk pen holder.
(Photo courtesy of Lionsteel) 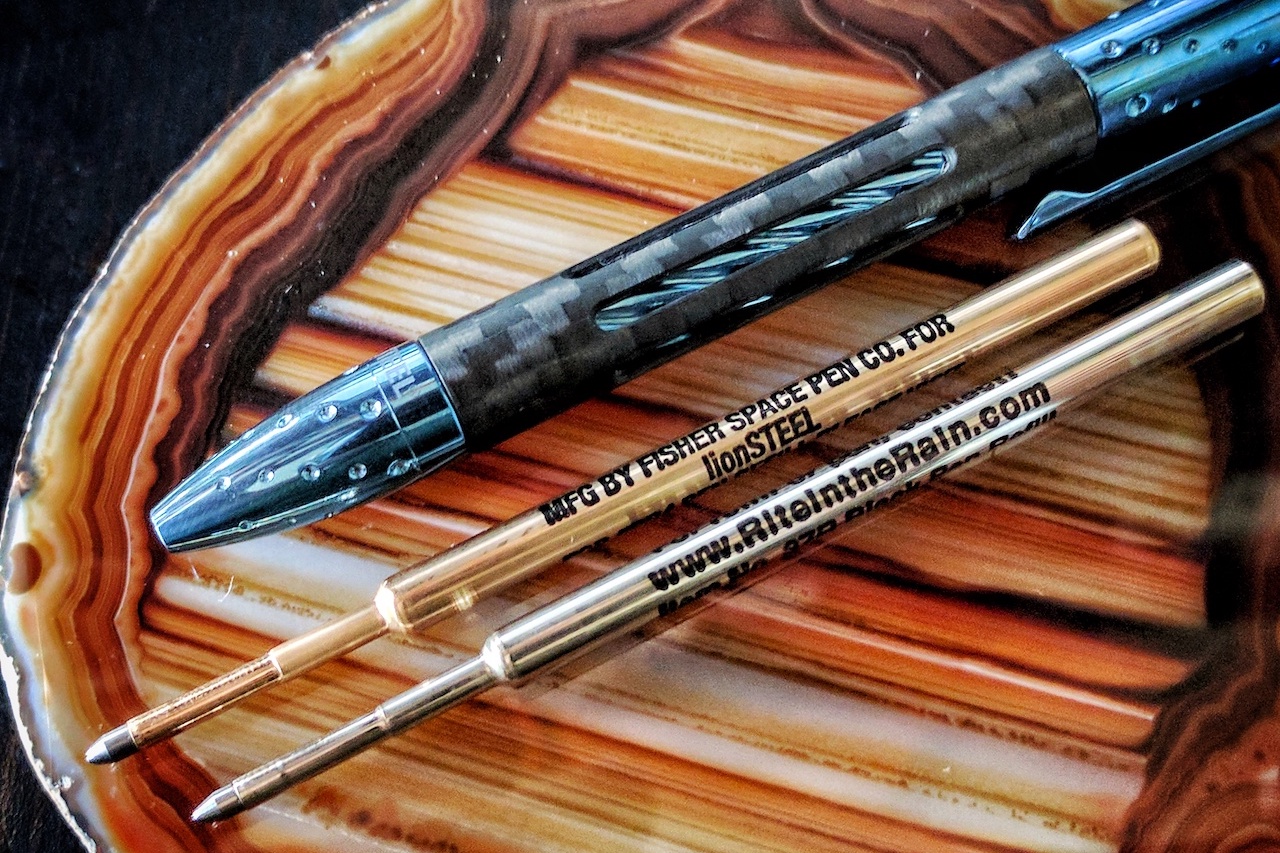 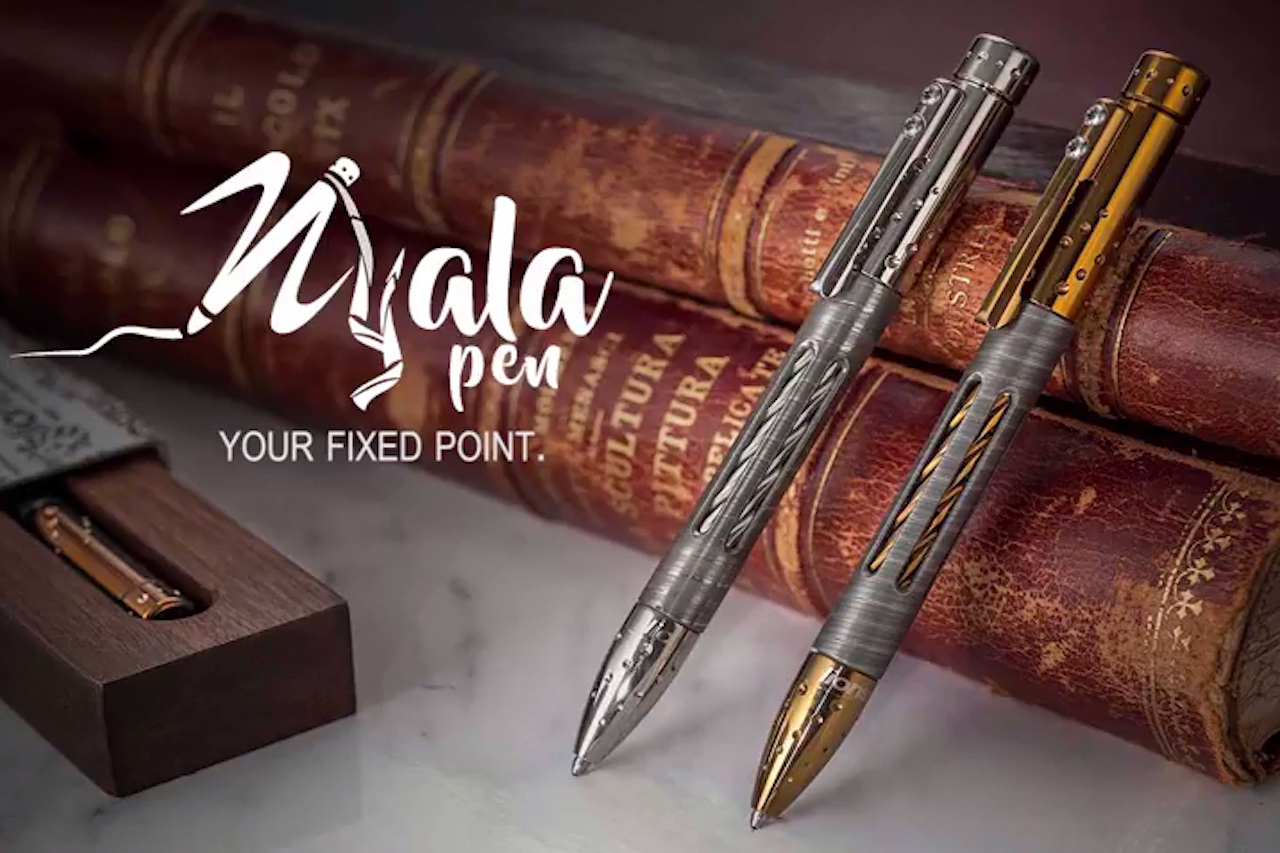 The first advertising image of Nyala, released just a few days before the 2016 Blade Show.
(Photo courtesy of Lionsteel)

The pen is an everyday object, often brought together with a knife. Over the years, many manufacturers of knives or tactical material have inserted one in their catalogues.

When Gianni Pauletta, owner of Lionsteel, asked me to design a writing instrument to bring his brand, I was immediately enthusiastic. For many people pens and knives may look very different objects, but not for me. I use both every day, and collect them too.
In addition, being able to say something new about such a common object would have been much more difficult than in the field of knives, where it already is neither simple nor obvious. Designers like challenges, at least after having overcome them.

Gianni was very clear: he did not want a tactical pen, because that market is satured, and anyway it wouldn’t have expressed the correct corporate image. Our pen would have to be a synthesis of Lionsteel’s products: high technological content, and the continuous search for innovative solutions.

Of course, it also had to be practical. Personally I love fountain pens, and when I can I write with them, but when I’m around and I have to take notes on the fly, the classic ball or roller is the only choice.

The search for the right inspiration

Despite having tried to define right away the largest number of features, the development was rather long: initial sketches are dated August 2014, while the final design was ready in April 2016, and went in production after a few refinements.

Searching for inspiration, in addition to observing the trends setted by the major international brand, I immediately focused my research on mechanical parts belonging to different areas, to find ways to characterize the final object, without compromising ease of use.

Many pens have a removable cap. This solution allows for greater freedom to define the overall design, and is perfectly suited for indoor use.
In the case of Nyala, we did not want to create an ornament, but a writing instrument which could be used anywhere, so we have ruled out the presence of a removable cap, given the high risk of losing it.

Only one thing could have been worse than not being able to get to the functional and attractive lines: creating a beautiful pen, with a poor writing quality. Initially I designed a slot for a standard Parker refill, to allow the choice between all the brands using this standard. However, it soon became clear that it was too big to obtain the compact size we were aiming to.
We needed something shorter and of high quality, because probably it would have been impossible to insert another refill in the same compartment: the Fisher Space Pen was a natural choice: I had used it for years in other pens, appreciating his writing quality and reliability.

Fisher Space Pen Co. has been providing pens & ink cartridges for the Space Program for over 45 years, with pens flown on every manned space flight and in use, every day, aboard the International Space Station. Based on technology developed by Paul C. Fisher in 1966, The Fisher Space Pen is designed to perform reliably anywhere and everywhere. The sealed pressurized ink cartridge inside this pen will allow it to write in extreme temperatures (-34 degrees Celsius to 121 degrees Celsius), under water, over grease, at any angle, even upside down! “Goes Anywhere, Writes Everywhere”TM

The idea I was expecting, which then would have evolved to become the final product, came when I was eating a pizza, after attending a musical event. A terrible concert to be honest: it is quite common to hear the violin badly played, but I never thought to hear such sounds coming from a piano. Yet I can not exclude that it was the right shock to move what was so hard to get.
Taking advantage of the paper tablecloth, I pulled out the pen that I always carry with me for similar cases, and sketched the idea not to forget it: the pen Lionsteel would have had a twisted titanium central body, to remind the Lionsteel’s experience in machining from solid, surrounded by a carbon structure, to emphasize the modernity and technology that characterize the brand’s products, with a number of openings to see the working below.

Once the design, he had to figure out how to extract and retract the tip, that given the absence of a cap would have to be protected.

The most obvious solution seemed the button, but it soon became clear that that just as obvious, was not the right one for signed Lionsteel pen. Evaluated various systems, characterized by complexity and reliability variables, Gianni and I agreed that the opening by rotating the rear would be the ideal compromise between sophistication, ease of use, and consistency of operation.

The launch packaging recalls those of Lionsteel’s folders: a massive wooden rectangle, milled to create a slot for the pen. In addition, it also works as a stand: just turn it over to expose a hole to insert the tip, and a slot to fit the cardboard casing with manufacturer logos.

The first appearance of Nyala coincided with the 2016 Blade Show, while the first units arrived in stores in November 2017.
The initial lineup was made up of six models: a damascus outer tube paired with bronze or gray titanium, or a carbon fiber outer tube with a gray, bronze, blue or matte blue titanium inner piece. Later, additional versions with black titanium parts were introduced.
The recommended retail prices, in Italy, are € 190,00 for damascus versions, and € 160,00 for carbon ones. 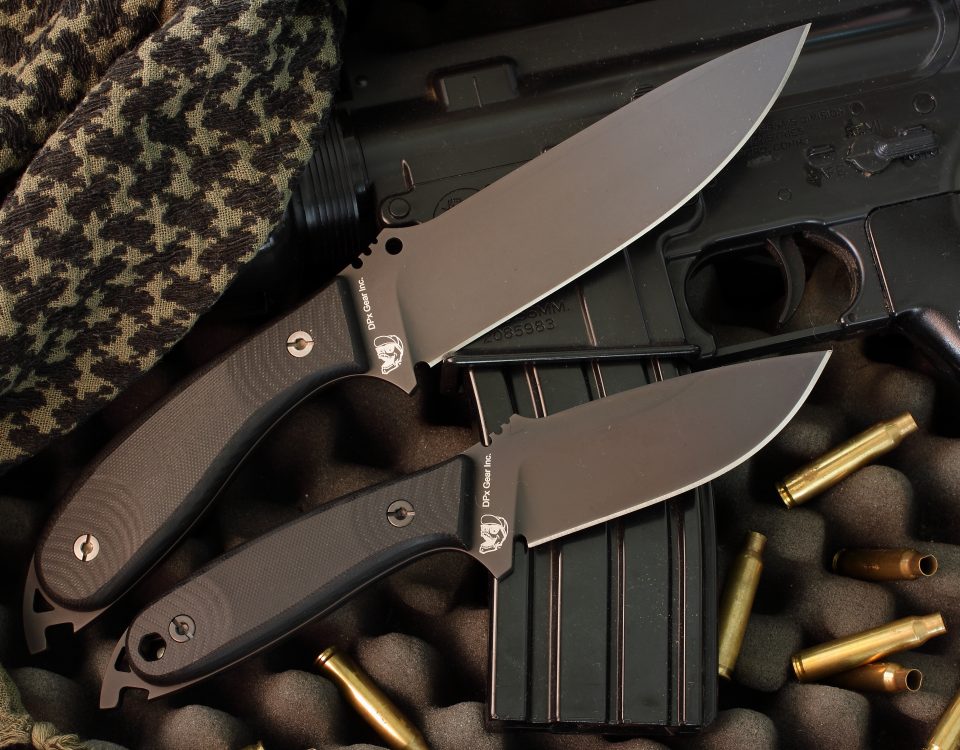